So has anyone used a USB power brick to give power to the cam? If so how long can you go with a single charge? I ask because the area I plan on putting my cam’s at don’t currently have any power receptacles close by so I figured I could keep the expenses down by using a simple USB power pack.

This shows what you need.

The camera will work fine powered from a USB power brick. I’ve done that when scouting locations for the cameras, before deciding exactly where to mount them. However, I have not run it for more than 1/2 hour that way.

You can also get inexpensive longer USB cables to reach an outlet, such as these: 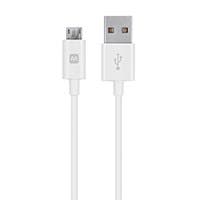 Stay Connected Fun Colors PolycarbonateConnector Heads Stay Connected: Charge your device from any USB power source or sync your music and photos by...

UPDATE: I just noticed there’s a FAQ on this in the support section which says:

I went ahead and ordered a couple of these cables as I think 15 foot should make it to the nearest outlet.

Hi… A lot of these “UPS solutions” seem focussed on “shutting down the computer when there is a power glitch”. I’m not interested in that functionality, because all of my power glitches are less than a second long. The last thing I want is for some “helpful” software to shut down the machine just because the power went out for an instant.

I think they are referring to battery packs not ups power

Hi, I’ve just started using a Wyze Cam, and found this conversation, because I’ve considered the same. I wonder if the time referenced was ever observed/tested by anyone here? Is there actual average data to reference?

From anecdotal user experience, it seems like the camera uses 500-600mA on average, but that varies a bit depending if IR illuminators are on at night, whether it powers a Sense Bridge, etc. So a 1200-1500mAh battery should last you about a day.

There’s an official support article that indicates usage around 600-625mAh, but actual usage would depend on several factors

How much power do the Wyze cams use?

Wyze Cam and Wyze Cam Pan don't have a battery, so they'll need to be plugged into an external power source.  Each camera comes with a 110V power adapter and a 6-foot USB power cord that can be plu...