Anyone have a solution for using house doorbell AC wiring (the two wires that normally power the doorbell ringer) to power USB? I want to install my soon to be 5th (I’m hooked) WyzeCam at my front door. I have no outdoor power at my front door, and I don’t want to have to drill and pull power through my exterior wall insulation. Since I installed a wireless doorbell years ago, I have the doorbell AC power wires sitting unused right where I need them; however, I’ve been unable to find something that will convert the doorbell power (I guess it’s 20V AC from what I’ve read on the net?) to 5V DC to power my WyzeCam. Anyone have any suggestions? I’m pretty handy and not afraid to do some soldering to get something working.

Thanks in advance for any help!

There are a few ways to handle this, depending on how handy you are with soldering irons and electronic components.

One approach is to reuse the doorbell wires, but disconnect them from the bell transformer (somewhere in the basement? in the utility closet, etc) and connect instead to a PoE (Power over Ethernet) injector. These are commonly available online - used for security cameras, VoIP phones, and other such gadgets. Then use a USB PoE splitter to convert the PoE voltage into 5VDC. You might have to do a little carpentry to fit the PoE splitter in behind your door frame. An example of the latter is here: 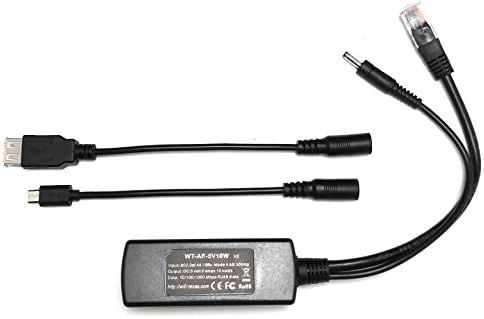 Another scheme is to repurpose a Dashcam hardwire kit. These gadgets are DC-to-DC converters, delivering 5VDC to power dashcams. I just bought this one from Amazon to power a dashcam. 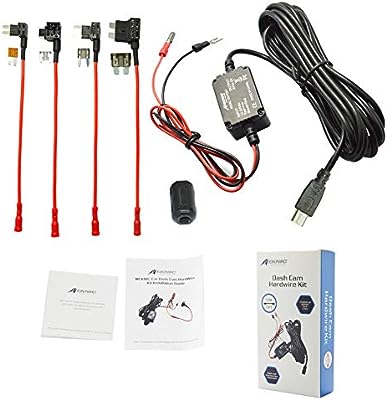 
It’s quite flexible, in that it will accept either 12VDC or 24VDC as input, and convert it to 5VDC. Some bell transformers produce 20VAC. Another common doorbell voltage is 16VAC. That’s what my house has. If your transformer is 16VAC, you’re in luck. It’s pretty easy to convert the 16VAC into 24VDC (approx), using a half-wave rectifier. That’s nothing more than a series diode (1N4004) and a parallel capacitor (20 microfarad or so).

If your transformer isn’t 16VAC, or if a half-wave rectifier is beyond your DIY skillset, you could replace the bell transformer with an off-the-shelf wall wart power supply, one that produces 12VDC or more (say 15VDC, or as high as 24VDC), at 500 mA or greater. Then use a dashcam kit to convert the 12V (or 24VDC) input into 5VDC for the Wyzecam.

Or, perhaps simpler, a 12 VDC wall wart in the basement, and an automotive cigarette-lighter style USB adaptor hidden behind the door frame.

Thank you for the detailed and helpful reply! I think I’ll look into the PoE approach. Just need to fine where the bell transformer is hiding!

Did you finish this upgrade? Can you post pics of how you did it and what it looks like?

Sorry, a novice here, but are you saying you use the two wires for the doorbell and insert into an RJ plug and then plug that into that adapter you referenced the POE? Then just crimp it in the new plug? Which slots do the wires go in?

Why all the complicated solutions?

Can’t you just replace the AC transformer in the basement with a 5v DC wall adapter? The transformers are usually plugged into a wall plug anyway.

Get a micro USB cable and wire it into the doorbell wires at the door.

using resistor you can make a voltage divider.
you can find the equation online

Aw yes, forgot about the rectifier!

You guys are making this way more complicated than it needs to be.
Disconnect wiring at doorbell transformer. By camera end, cut off a piece of a USB-micro cable (make a pig tail) and splice it into exiting (door bell) wiring. Keep an eye on polarity. At “the other” end, splice in the USB-A connector (make sure to match polarity) and plug into a USB charger. Needless to say, you will have to render doorbell button inoperative and “bypass” bell so you have a straight supply from source to Wyze.

Or just use any 5V DC power source. If you have many cameras and want to feed from one central location, like if you want to have them - as well as your network - running on battery or UPS during a power outage, use a centralized power supply/battery combo.
If you needs lots of “USB” power, a regular computer power supply will provide an ample supply of nice, clean, regulated 5V DC. This is not really rocket science, but wonders can be concocted using some basic tools (soldering gun, multi-meter, etc).
Personally, I try to have everything “network related” running on 12V DC supplies, with 5V DC being the secondary voltage (for Wyze and a few other scattered devices).

Btw, if you still need doorbell button to be operational; get a dog

I just ordered ac to 5 volt dc Buck converter from Amazon. I have a 24 vac doorbell transformer in the garage near where I want to put a camera. I don’t have a 110 volt outlet nearby. I’ll have to cut off the usb end and wire it to the converter. About 13.60 from Amazon. I post the outcome when I get it up and running.

You can use IFTTT to restart your camera once a day.