Oh dear, so disappointed that the plug is NOT RIGHT ANGLED! I think there is only one competitor with the ideal right angle that fits neatly in our outdoor protected electrical boxes (up here in Canada anyway).All the others have gone for this easy less suitable option.
Sad that WYZE has followed the others so the plug sticks out from the socket so that the weather protection flap will not close and seal the unit from the elements.

Note: there is no picture of how / where the unit plugs into the electrical socket.

Why don’t you just buy a cheap separate 90-degree/right-angle plug adapter? There are tons of them out there for really cheap…problem solved for everyone… (Edit: ie: search Amazon…found several fairly flat adapters for under $3/plug).

I say Wyze should do whatever is cheapest and let us choose if we want to spend the extra money on a right angle adapter (I don’t).

Feature rich outdoor plugs. Ordered 3. If only it had a dimming option…

A smart plug with a dimming option? Never heard of that…usually that’s for bulbs or light switches…I know people use plugs for lamps, but can a plug actually dima light? I guess if they reduce the power enough, maybe. Seems like a smart bulb is more what you’re looking for though…

If you’ve ever had a string of those lights that people use on their patios, you’ll either unscrew half of them of worry about a 747 mistaking your backyard for runway.

@carverofchoice – There are currently a couple of items on the wishlist you may want to vote for. The biggest issue I can see (not insurmountable) is the Wyze family of products are all server-based, so they can operate from wherever you are in the world, and notify you wherever you are in the world. This also reduces the cost of products because individual devices don’t have to keep their own time. The disadvantage is summed up in your requests, but given enough effort, I think they can be accomplished:

Detect internet signal and if it doesn’t connect power cycle the device. This way a modem could be plugged into the device to reset a modem until the network is reset

A feature I would like to see is to get an alert notification if my camera is disconnected/switched offline outside of manual activation in the app. This would help in cases folks could be alerted to power outages or at least get a heads up if someone/something potentially unplugged the camera.

Interesting. Thanks for the example. I can see how that would be nice to have for those string lights on patios. Would probably save some energy too. I wonder if Wyze could implement that with a firmware update. Might not be possible depending on the hardware limitations, and I’d probably personally never use it, but if the hardware allows it, it seems it shouldn’t be too hard to do, just limit the power output with a setting. Of course, Wyze takes months to implement new firmware features, so even if it is possible, I wouldn’t expect it for a long time, but it would be cool to have…I mean, maybe make some Halloween decorations fade and brighten to make it creepier.

Guessing it will be a hit. Will be ordering a few shortly for my gutter de-icing coils. But I would prefer a right angle plug since they do hang more straight instead of hanging at an angle with stiff cords in cold Wisconsin winters LOL. They would also fit blow molded outlet covers way better. Thanks for another great product for the Wyze - verse.

Thanks, you are right, those 2 wishlist items are exactly what I would like them to implement in these plugs like other competitors offer in some smart plugs. I voted for both of them.

“plenty of them out there”. I searched HD, Lowe’s, Menards , nothing. ? Cut the supplied plug off and rewire with a new right angle plug? Invalidating the warranty?

Yeah, I was talking about Amazon, I ran a brief search on Amazon for things like “Right angle plug [or outlet] adapter” and saw several cool options. Many looked even more flat than the one posted above. Some are also outdoor rated themselves.

I’m surprised none of the other stores you mentioned had any…you’d think it would be something Lowe’s and HD would carry! Hopefully you can find a good solution.

Though, I do agree with you that all things being equal cost-wise, it would make much more sense for an outdoor plug to be right-angled. 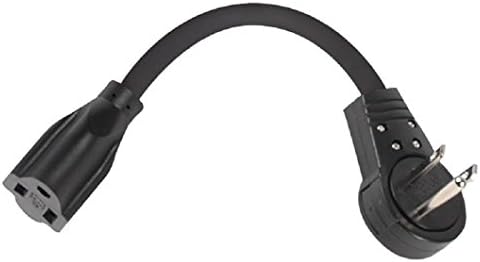 Other options too if something else would work better for you, but some of those are less than $3 per plug, which is not bad.

The outdoor plug seems like a good deal but really wish it had Homekit support. Just got two Meross Outdoor Plugs for $18 each. Only $2 more than the Wyze version with shipping and they have native HomeKit support, Prime shipping and great performance. If Wyze would have had HomeKit support I would have picked up two just to support them. I will still recommend these to Alexa/Google users but I really wish Wyze would get on the ball and support HomeKit already.

Those do look like nice plugs, but they’re normally $39 each on Amazon, and they aren’t in the Wyze ecosystem for better inter-functionality with all my other devices.

Still, I can understand wanting Homekit if you’re invested in Apple. Wyze has said they’ve been looking into Homekit support on some of their devices, maybe they’ll eventually do it. I know Android has 87% of the global market share (fluctuates a little), so it’s the best place to start, especially when the plugs will also work with Apple phones, even if not homekit yet. Half my brothers have Apple ecosystems, but I am kind of anti-apple myself…way too greedy/exploitive, proprietary/limited, and expensive for my tastes…but hey, it’s a huge demand in the US and it would be a smart market for Wyze to cater to increasing sales significantly.

@carverofchoice and to any and all who would like to see this added - I have created a wishlist topic, please follow the link and vote to have your voice heard: Wyze Plug Outdoor - add Modem/Router reset functionality

Create a selectable option in these to be used as an automatic modem/router resetter. Other plugs allow you click a “reset” setting that tells them to turn off, and then turn back on. You can set them up on a schedule to reset the router every night, or set an option to have it just reset the router when the internet is out for X amount of time , thus restoring internet.

Another product…seriously Wyze? Now we know where all our customer support resources went. And no wonder they didn’t have to funds to keep Person Dection free (like they originally promised). Fix the current products you already have!!!

A cool product at a remarkable price point! I just ordered a few. Going to be a fun start to 2021 as all these pre-orders start arriving. Kind of like a delayed Christmas.

Going to be a fun start to 2021 as all these pre-orders start arriving. Kind of like a delayed Christmas.

The restart power thing is a big deal. Lots of us are regularly restarting our devices (like our Wyze cams, hint, hint).

As to dimming, I always wish my smart plugs would allow that since most of them are being used with lamps. And of course lowering the voltage can dim lights. That’s how it was always done with incandescent bulbs and most dimmable LED bulbs can work at least a little bit with such “old school” dimming.

The outdoor plug is a good move and also ideal for indoor use. I have some outdoor Feits but the fewer apps the better.