How can I protect my sd cards?

So I have a drug addict that lives with me and once before I have had problems with them stealing sd cards. I’ve been paying for the camera plus, but it misses a ton of events. I’m on the verge of super gluing the SD cards in or making some lock box for the camera that somehow keeps someone away from the SD card.

Does anyone know of a lockbox or better solution than gluing

Note I’ve already suggested there to be an alert on when an SD card is removed and added.

Wow I’m so sorry. And geez SD cards cost like $4, what could he or she be getting for them

Anyway, CamPlus really should obviate the need so it’s weird it misses your events. Wonder why they’re not just stealing the whole camera?

Only real suggestions I would have are protecting the camera as you suggested already, or setting up RTSP to feed the video somewhere safer (local or cloud NVR of some kind).

As far as what they are getting from them. I think it’s more of them expecting them to stop recording. Her kids (5 years old) showed me where some of them are, and they were in the back of a box.

But it should be noted the stuff isn’t encrypted and it’s easy to pull whatever you need if the card was continuously recording.

I’m not getting too much deeper into the situation. But basically we are talking about a horrible person who wouldn’t have access to her kids if it wasn’t for me and a few others. But the other option is the court case being dropped, she gets kicked out and her kids going to a dad which allowed people to have sex with his 5 year old son for money. 1 problem at a time. After this, we will fight her for custody, or force her to be mentally looked at and get better that way. As I said, I am not going into the details. But this is hopefully a unique situation.

So as far as why she didn’t steal the camera or what her plan with the cards was. I honestly don’t think anyone can predict because she is nuts.

As far as a rtsp solution. I can’t find a good program that doesn’t mess with the audio sync. Like it speeds up the video by far, or things are way off.
Plus I have 11 cameras active. So that takes a bit from a computer.

Okay. Again, sorry about the situation. I really think the most straightforward approach here is figuring out why CamPlus is not doing the job for you. The SD cards should really be irrelevant if you’re paying for functional CamPlus service…

You could probably DIY something using a clear outdoor power outlet cover, those normally have a place that can can attach a lock. That being said it would only stop an honest person from tampering with it.

I agree. I have the settings as high as it can go on all my cameras. I’m about to send the support an email in a bit.

Thanks for the heads up. I have a 3d printer, and maybe that could work with 1 of my cameras. I have to figure out what to do about the pan cams.

I know this isn’t what you want to hear, and isn’t a solution to the SD card thing. But the best solution is to kick this woman out. There are ways to deal with the police and the courts in your state to remedy the other problems.

If you find some way to secure the SD card, she will simply find some other way to keep you from getting a recording, addicts are very resourceful.

If you insist you need some other solution, maybe try getting another camera and try to keep her from knowing about it. You can position this camera to either watch the first, or cover the same area as your situation dictates.

Again I’m sorry I know these are not the solutions you where hopping for. The hardest things in my life I had to deal with where cutting off addicts so not to enable them.

No but seriously you could use an extension and place the SD end in a locked draw or something. …but seem to come 19 inches longest …IDK.

But, still can be compromised …? 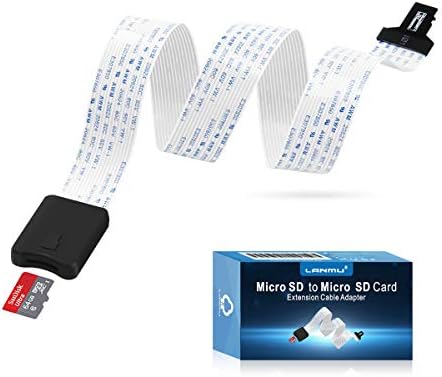 There are ways to deal with the police and the courts in your state to remedy the other problems.

It has been looked into and even down to the court messing up and literally breaking laws (do to ignorance or lack of care). But we are at the final stages of this mess. To save these kids, it costed as much as a small house so far. Let’s put it that way. And once we are done with 1 parent, we are going to go after the other. Our hope is to get her fixed so she can take care of her kids. Otherwise, we have to adapt as we go.

Anyways, the problem with that solution is it doesn’t help when you have no idea when they took the SD card. Since there is no notification currently if your SD card is removed or inserted. We are SOL. BTW vote here if you want this feature SD Card Notification/Information

That is an interesting thing, but doesn’t solve the problem since there is no notification when someone unplugs the SD from the camera. If you want this feature btw vote here SD Card Notification/Information

I have to figure out what to do about the pan cams.

You could maybe get a square block of wood or sheet of metal that is a larger than the square bottom of the pan cam. Screw the block to the cameras 1/4 inch 20 thread with a non common screw “like a torx”. It would pretty hard to get a finger in that gap to eject the SD card without removing the screw.

@crua9-very short to hear about your situation. That has to be tough!
You don’t say if you are on IOS or Android but if you are on Android, check out TinyCam Pro. It offers a cloud storage feature similar to Cam Plus but it’s been around longer. It’s extra charge but as I recall pretty reasonable and the Pro Version of the app is only about $4.
Hope that is of some help in a tough situation.
@Customer‘s suggestion of using RTSP could also be a possible solution. Info on RTSP Here